J-Crowned: An Illustrated Guide to the Champions of Japanese Wrestling (English Edition)

Matt Charlton Oct 16, 2021 Matt Charlton
Since the debut of Rikidōzan in 1951, Japanese professional wrestling has created a legion of grappling superstars, taking a distinctly Western art form and making it something uniquely their own. It began with a simple story—a valiant Japanese star taking on enormous American invaders, the narrative a reflection of Anti-American sentiment that remained strong after Japan’s defeat in World War II. Even before television sets were widespread, Japanese fans would gather around TVs at department stores and publicly cheer their heroes to victory. Rikidōzan spawned dozens of copycats and proteges, each one a hero in his own right. Soon, Japanese wrestling became an industry of its own, big enough to support multiple companies and thousands of matches a year. The top wrestler in every company was usually the heavyweight champion, each king part of a legacy that extended all the way back to Rikidōzan himself. All are part of something bigger than themselves, representative, for a time, of the best Japan could offer the wrestling world. Wrestling historian Matt Charlton puts each major champion in context, capturing their likeness and telling their story. The result isn't just a beautiful illustrated guide to the champions of Japanese wrestling—it's a history of the sport itself as told by an admiring enthusiast of the form. 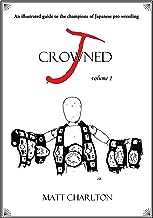